As we continue our (semi) series on relationships  ̶  “Kiki, Do You Love Me?”  ̶  today we will focus on a basic psychological reality which directly contributes to, if not causes, conflicts between men and women.  Sometimes, these conflicts are irreconcilable and, subsequently, unresolved.  Interestingly, couples often address this basic psychological reality by cloaking the issue in God-talk or spiritual language.  This act of verbal camouflage simply further complicates an already complicated dilemma.

Today, we will zero in on what some psychologists call anima and animus.  Anima is designated as the “feminine qualities” in a man.  Animus is designated as the “masculine qualities” in a woman.  The animus belongs INSIDE of the woman, not outside of her. Similarly, the anima belongs INSIDE of the man, not outside of him.  When those inner qualities come out and become dominant, problems ensue.

Here is the challenge: the animus and anima do not like each other!  So, when they confront each other, there are no winners at all.  You may win the argument but, invariably, the costs will exceed the benefits.

Today’s message will help all male and female relationships: wives and husbands; boyfriends and girlfriends; mothers and sons; fathers and daughters; opposite sex colleagues, etc.  God will be glorified because today you will at least begin to understand how to communicate more effectively and peacefully.

THE ANIMUS AND ANIMA

The animus in a woman and the anima in a man bring out the worst in each other.

THE ANIMUS AND ANIMA IN ATTITUDE

THE ANIMUS AND ANIMA IN ACTION

Sources:  Between People: Communicating One-to-One  by John A. Sanford 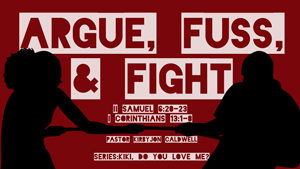