Sermon Notes: THERE ARE TWO WAYS

“THERE ARE TWO WAYS TO LOOK AT THIS!”

Bless The Lord!  You are reading the first sermon notes which accompany a sermon via virtual worship.  Basically, life can be viewed and pursued from two (2) fundamental perspectives. One of the perspectives looks like this: a) optimism; b) hope; c) faith; and d) the power of God’s resurrection.  The other perspective looks like this: a) pessimism; b) despair; c) doubt; and d) weakness.  Your adversary relishes the thought of your viewing and pursuing life through the lens of the latter perspective, not the former. 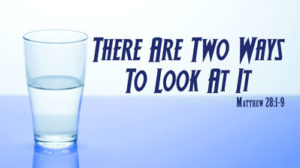