On July 17, 2020, Rev. C.T. Vivian and Congressman John R. Lewis died.  These two civil rights titans joined the “great cloud of witnesses” who paved the way for our freedom. Vivian participated in Freedom Rides, marched with Dr. King, and was the director of national affiliates for the Southern Christian Leadership Conference (SCLC) that led people to register to vote in Selma, Alabama. As Sheriff Jim Clark blocked the group, Vivian said, “We will register to vote because as citizens of the United States we have the right to do it.”  Sheriff Clark viciously beat Vivian on national TV until blood spilled from his head. The images helped galvanize wider support for the civil right movement.  Congressman John Lewis, the son of sharecroppers and leader of the Student Nonviolent Coordinating Committee (SNCC), survived “Bloody Sunday” when Alabama State Troopers beat and whipped peaceful marchers in March 1965 in Selma, Alabama that eventually led to the passage of the Voting Rights Act.  Lewis became an iconic and towering figure of the civil rights movement and a longtime U.S. Congressman from Georgia. Recalling “Bloody Sunday,” Lewis said, “I thought I was going to die.”

Both men decided to radically, but peacefully disobey unjust laws for change in America!  Vivian and Lewis join a long line of history-makers and trailblazers who decided to speak truth to power with their words and actions! They refused to stand by and watch an oppressive and destructive system disenfranchise a group of people. Today’s sermon chronicles the story of another tag team tandem, Shiphrah and Puah. These two Hebrew midwives risked their lives and stared death in the face to save others!  Like Vivian and Lewis, who thought they’d die, Shiphrah and Puah refused to let anyone else die.  Thus, their decision that day helped changed the course of an entire people.  They made up their minds to get into “Good Trouble!”

Systemic racism is real!  The Exodus narrative (and others in the Bible like it) highlights this harsh reality.  Despite centuries of discriminatory practices in America that have left us black and blue, we are still here!  God remains faithful and, in the lyrics to “Amazing Grace” keeps us, “Through many dangers, toils, and snares, I have already come.”  God always positions people in spaces and places to divert and deflect the devil’s evil intentions!  God used Shiphrah (which means “beautiful” in Hebrew) and Puah (which means “girl” in Hebrew) to stop a pre-meditated massacre of males.  Like Vivian and Lewis, Shiphrah and Puah risked their lives by disobeying the power structure because they feared God and believed BLACK LIVES MATTER!  Bold interventions are what we need to see more of today! We need more people willing to get into “Good Trouble!” 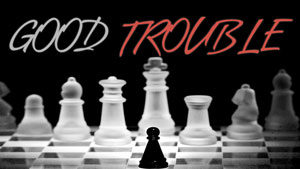