Sermon Notes: Is the DREAM a Nightmare?

“Is the DREAM a Nightmare?” 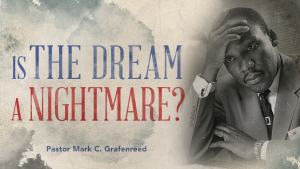 Where Do We Go From Here: Community or Chaos? should be on every person’s bookshelf, especially African-Americans.  This book was The Rev. Dr. Martin Luther King, Jr.’s final publication.  Released in June 1967, the book captures the essence of Dr. King’s heart and the legacy for which he would want to be remembered.  Nine months after its release, Dr. King was assassinated on the second-floor balcony of the Lorraine Motel by a single rifle’s bullet in Memphis, Tennessee on April 4, 1968.  While Dr. King was certainly a target of the FBI, CIA, KKK, and just about every other three letter organization, the book’s content and message likely led to his demise.

We will spend time this long holiday weekend remembering Dr. King in different ways.  Some might attend a commemorative breakfast or program, watch a documentary or two on TV, or even speak to our enemies or neighbors for the first time and say we lived out “The Dream.”  Others of us will see it as nothing more than a day off!  In either case, today’s sermon is aimed at assisting us in avoiding our unintentional tendencies to dishonor Dr. King and his legacy.  Dr. King sought to live the heart of Jesus Christ’s mission statement.  We are in the legacy of Dr. King and, ultimately, Jesus Christ.  So, let’s not dishonor either of them by turning the Dream to a Nightmare!

Are we misremembering Dr. King?  More importantly, are we misremembering Jesus?  When Dr. King announced his revolutionary platform, he said, “The winds of change are blowing.”  When Jesus proclaimed His missional purpose, the winds of change were not only blowing, but Jesus blew winds of annihilation to the status quo.  Dr. King was sold out to Jesus’ purpose too!  Both were revolutionaries!  One thing is certain.  The status quo and a revolution cannot coexist!  One will absolutely fall, and the other will rise!  Are you a revolutionary?  If not, you just might be turning the Dream into a Nightmare.